Home Animals 8 Animals That Hibernate: Discover The Wildlife Around You 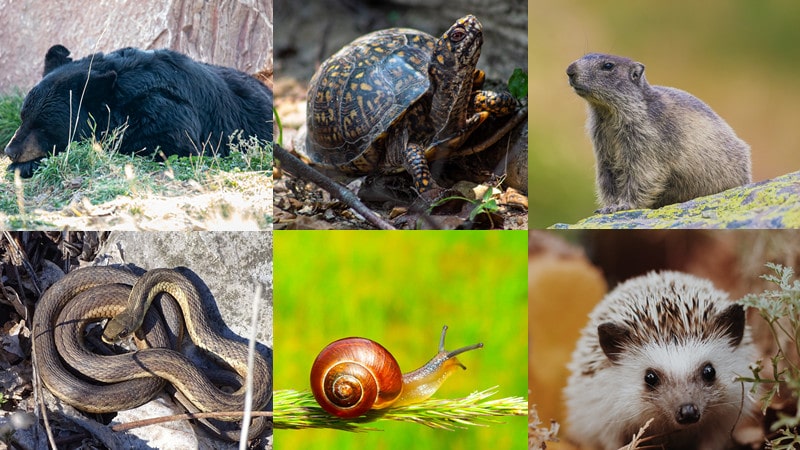 If you live close to the woodlands, you may have noticed certain animals disappearing entirely during winter. And you may have wondered what happened to them. Hibernating isn’t something humans do or are even capable of, so it’s a bizarre thing to imagine an animal spending an entire season asleep.

So what is hibernation? Why do animals do it and why can’t humans? This blog will answer all your questions about animals that hibernate. 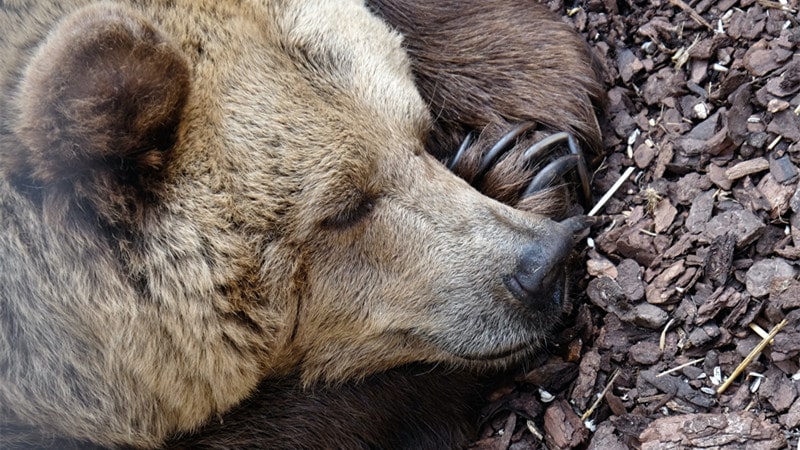 Hibernation is the state of dormancy an animal undergoes during periods of extreme weather conditions and low food availability. Animals that consume plants, insects, and small creatures struggle to find this sustenance during winters.

They get ready for this by collecting and storing food and lowering their body temperature, heartbeat, breathing, and by virtue, their energy requirement. This helps them survive the winters and periods of food shortage.

Animals that hibernate don’t exactly sleep. Rather, they go even deeper into an almost coma-like state.

The main reason humans don’t hibernate is that our evolutionary ancestors were all tropical species. And in tropical climates, there’s no season of extreme cold or poor food availability so there was never any need to hibernate. Human beings have only migrated into temperate and subarctic latitudes as far back as maybe 150,000 years.

But thanks to the formation of complex hunter-gatherer societies and innovations in agriculture, food has remained a year-round luxury for humans in warm and cold regions alike. 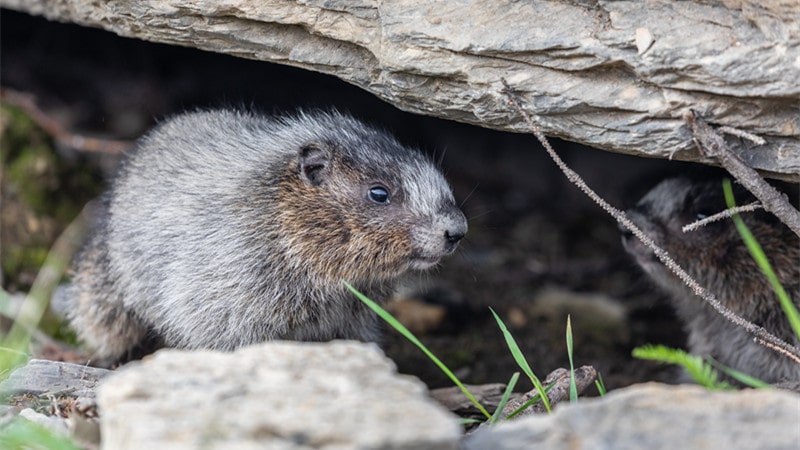 Hibernation is characterized as the state of inactivity resembling sleep, metabolic depression, and low body temperature. It generally only takes place during the winters in regions of higher altitudes and/or latitudes.

However, animals in hot climates also undergo a different type of hibernation that allows them to survive food shortages, extreme heat, and drought. This is known as aestivation or summer sleep and is typically performed by cold-blooded animals such as snakes and alligators.

The difference Between Hibernation and Aestivation

Hibernation tends to last much longer because mammals eat throughout the summer to build up enough fat and reduce their metabolism to maybe 5% of its full capacity.

And since aestivation is done to combat water loss or dehydration, it’s shorter because the body needs water again much sooner. 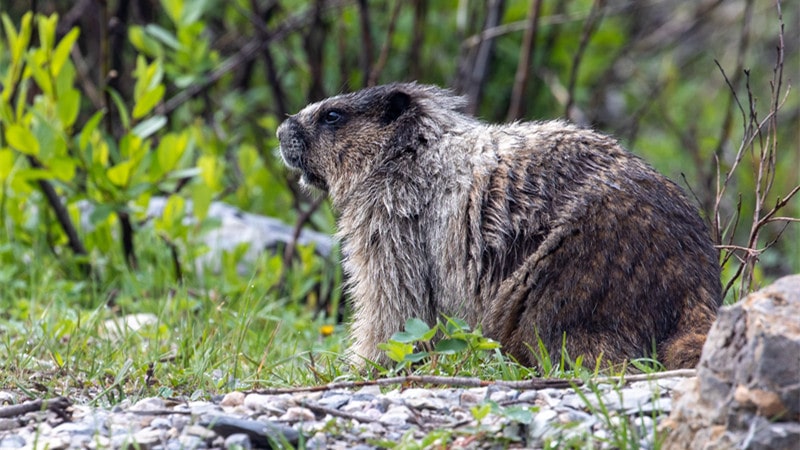 Hibernation, for many creatures, is the only way to survive the low temperatures and food shortages that winter brings. However, it still comes with risks. If the animal fails to eat enough and build up enough fat or store enough food during the summers, it won’t survive the winter hibernating.

Additionally, hibernation is a physiological state that takes time to achieve. If an animal somehow wakes up in the middle of its hibernation cycle, it might end up burning through all its fat reserves much faster and die. Bats know this risk all too well.

One of the major causes behind the deaths of millions of hibernating bats is a fungal disease called white-nose syndrome that causes bats to wake up more frequently during their hibernation periods. As a result, they end up burning through more of their fat than planned.

Every animal hibernates differently. Some store their food in burrows, caves, or trees, while others store it in their bellies as excess fat. Depending on the length of seasons in a region, the species, and other environmental conditions, the hibernation duration can vary significantly. For example, snails can hibernate for up to 3 years at a time. 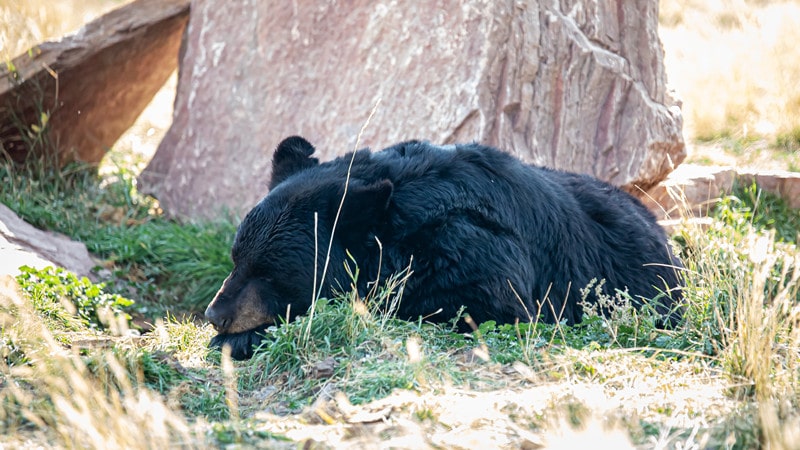 A bear might be the first animal that comes to mind when you think about hibernation. And they do hibernate for quite some time. According to Yellowstone National Park, grizzly bears hibernate for about 5 months.

However, not all species of bears hibernate. Bears in warmer climates, like the Andean Bear, can find food all year long and don’t need to hibernate at all.

As for how they hibernate? The bears that do hibernate do it through the winter. They’re not asleep the entire time but they don’t need to eat, drink, or excrete at all. It’s not that their bodies aren’t producing any excrement, the excrement usually just builds up until the end of the hibernation period. 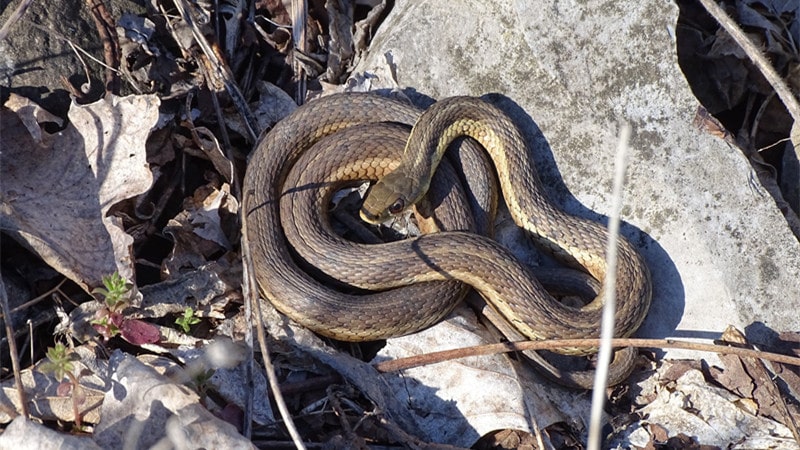 Garter is a common name for snakes that are small to medium in size and are generally harmless. They are endemic to North and Central America.

Garter snakes also hibernate during the winter to maintain their body temperatures. Being cold-blooded animals, snakes must either hibernate or die when the temperature outside drops.

Garter snakes hibernate by finding a safe burrow to coil up and rest in. Sometimes, they hibernate in groups and huddle up to stay warm. During their hibernation period, garter snakes stay hydrated by absorbing moisture through their skin.

And like any other animal, they need to bulk up during the summers to get through the season alive. 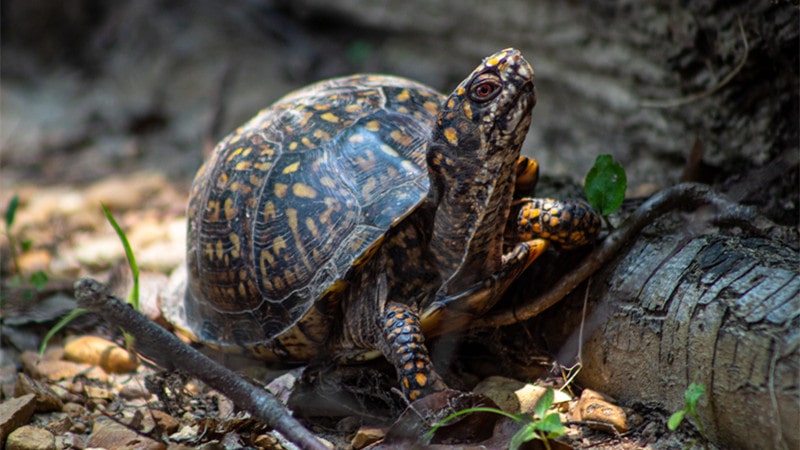 Turtles don’t need to go through the hassle of finding a good hibernation spot to cover them. They just need to find a good spot to rest and crawl into their tough shells. Freshwater turtles prefer to hibernate in the water but box turtles come on to the shore and excavate a small burrow to hide in during the winters.

The hibernation period can vary from species to species. Box turtles, on average, spend about 4 months in hibernation.

Turtles can get their oxygen by drinking water, and like most mammals, rely on their stored up energy reserves to survive hibernation. Because they cannot produce their own body heat, turtles need to hibernate during temperature drops to stabilize their body temperature. 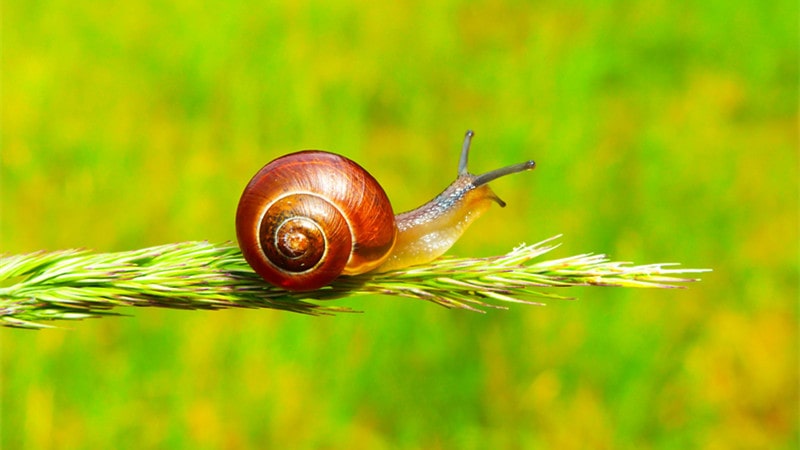 Snails are especially at risk during periods of low temperature because their bodies are mostly made up of water. If they don’t hibernate, the winter freeze might crystallize their internal organs, which is usually lethal.

One of the greatest adaptive mechanisms of snails is the multi-purpose mucus it produces. Once the temperature falls below a certain point, snails scour for suitable borrows, nooks, or holes in the trees or walls where the frost can’t reach and hide there.

Like turtles, snails also have a shell to withdraw into for warmth. They use their slime to create a lid over the shell that seals them in for several months. It’s not uncommon to find snails clustered together this way during winters. 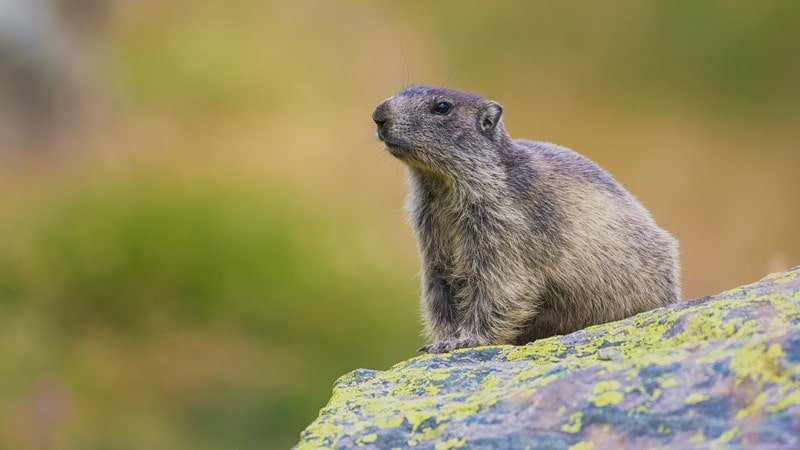 Marmots are a large species of ground squirrels’ native to Mexico, Eurasia, and north-central Asia. They tend to inhabit montane meadows, tundra, and forest edges and spend most of their lives in hibernation.

Marmots hibernate in underground burrows in huddles for about 8 months every year and burn their stored fat for survival. It’s hard to find a marmot meadow because the tunnel entrances are usually covered with camouflage material like dirt, leaves, and twigs. This offers them protection from predators and insulation to help marmots stay warm underground. 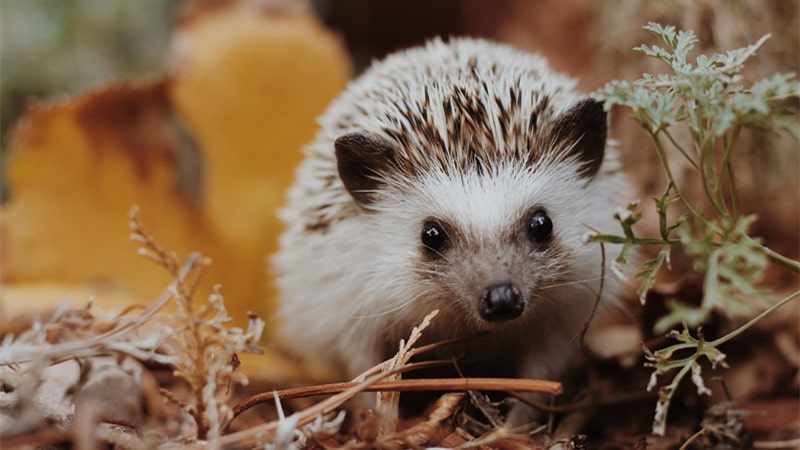 A wild hedgehog survives on a diet of slugs, beetles, caterpillars, and snails, all of which become unavailable in the winter. In order to survive, they have to become immobile and conserve as much energy as they can.

Their heart rate drops from 190 a minute to 20 and body temperature drops by over 60%. This reduces the strain on their respiratory functions so much that they only need to breathe once every few minutes.

A hedgehog’s preferred hibernation camp is the nests underneath hedges and trees, but they are also known to hibernate inside compost heaps, old rabbit burrows, or even human sheds if they live close by.

Unlike most mammals, hedgehogs tend to wake up every now and then and stay awake for a day or two at the most. However, they rarely ever leave the nest during the entire hibernation period. 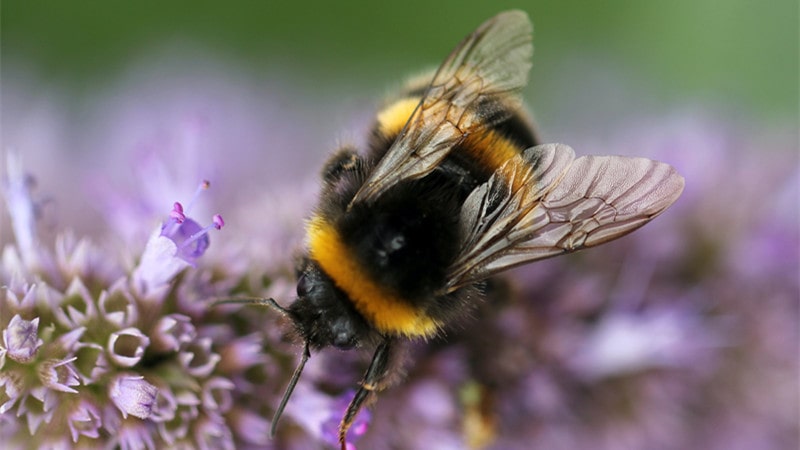 It’s hard to imagine an animal as hardworking as bees ever taking a break, which is true for honey bees. But did you know bumblebees hibernate for up to 7 months? The way hibernation works with bumblebees is a little different though.

You have to think of a colony of bees as a single unit and the queen as the brain of this unit. Around fall, the newest brood of queen bees and male bees leave the nest to go out and mate until winter strikes.

Once winter hits, each of these queens will find a safe resting spot such as a small hole in the ground or a tree. The old queens and males, however, die. 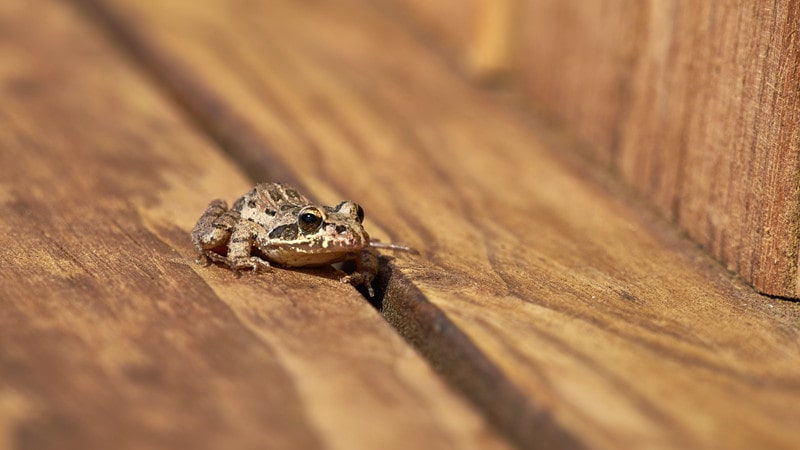 Wood frogs are exceptional when it comes to hibernation. They pretty much just freeze in one spot until spring. They’re a bit choosy when it comes to picking a spot but tend to choose litter piles on the forest floor, although it only offers a small amount of insulation from freezing temperatures.

Did you know, frogs actually spend the winter frozen solid? This would kill most animals, but frogs seem to have evolved to be able to withstand frost for up to 8 months. It’s all thanks to their anatomy.

When a frog is exposed to freezing temperatures, ice crystals encase its internal organs and form in the layers between its skin and muscle, freezing them in place.

However, the wood frog’s liver produces copious amounts of glucose and sends a syrupy sugar solution throughout the body. This solution protects their cells from freezing or getting dehydrated. This allows frogs to remain frozen and still continue to respirate.

Hibernation is an essential process for certain animals to undergo in order to survive extended periods of unfavorable conditions. Studies have shown that animals that hibernate are far less likely to go extinct due to the nature of this adaptation.

Hibernation allows animals to create a buffer from their environment when it’s at its harshest and they are at their most vulnerable. 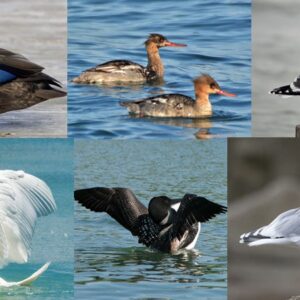 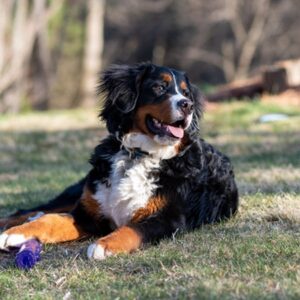 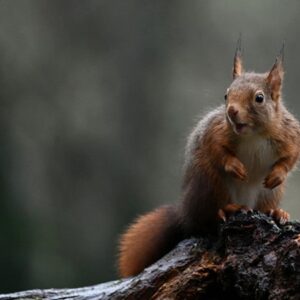 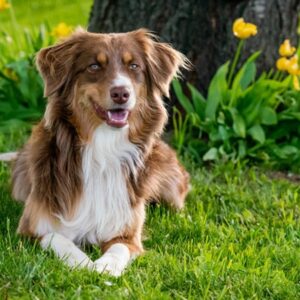 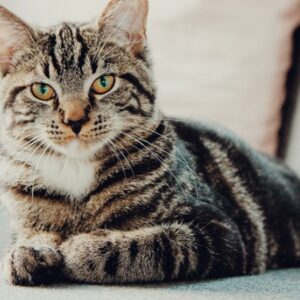 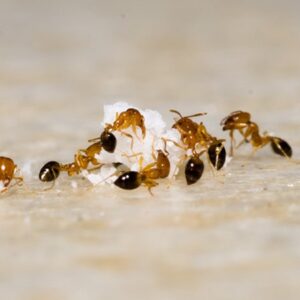 How to Get Rid of Ants with Borax: A Complete Guide

Animals June 28, 2022
Although ants appear harmless, they are capable of reproducing very fast and establishing large colonies within a few days. Well-established colonies of ants can cause… 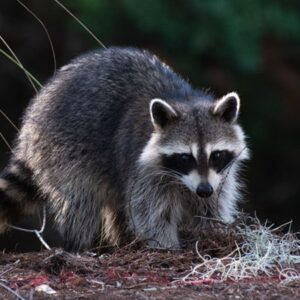 How To Get Rid of Raccoons: Best Methods for Raccoon Control

Animals June 24, 2022
Raccoons can look quite cute and furry, so it may feel a bit weird to think of them as pests at first glance. However, despite… 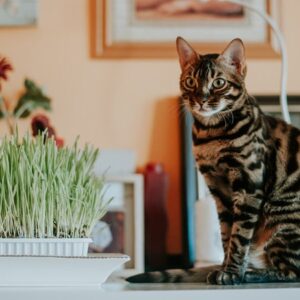